In October 2022 I was invited to help install John Grade’s sculpture Emeritus in Oregon State University’s Sequoia Grove in the Memorial Union Quad. The invitation came because of my experience climbing the Discovery Tree for Listening to the Forest which is included in OSU’s permanent collection. The new Patricia Reser Center for the Creative Arts furthers the university’s commitment to integrating the arts with the science for which OSU is known, especially forest science. John Grade’s sculpture celebrates this commitment. I was asked to give a response to Grade’s work and to connect it with Listening to the Forest. 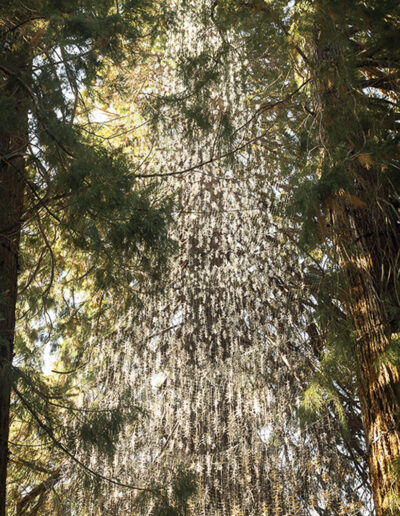 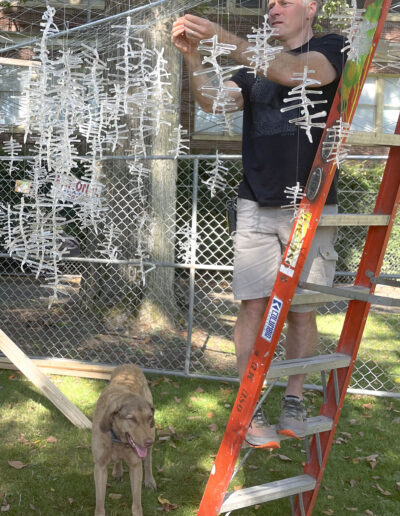 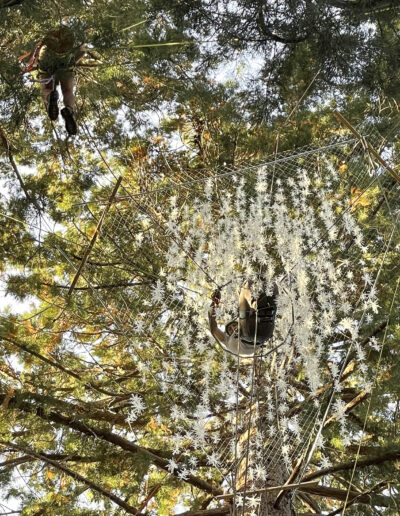 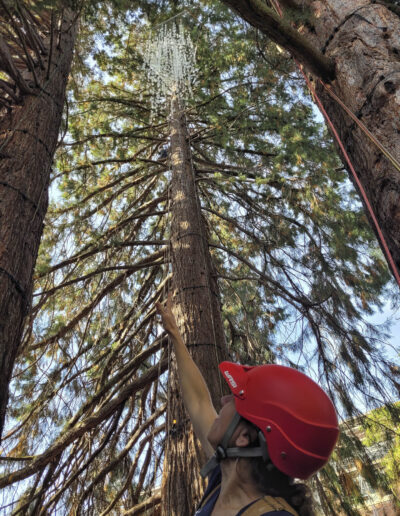 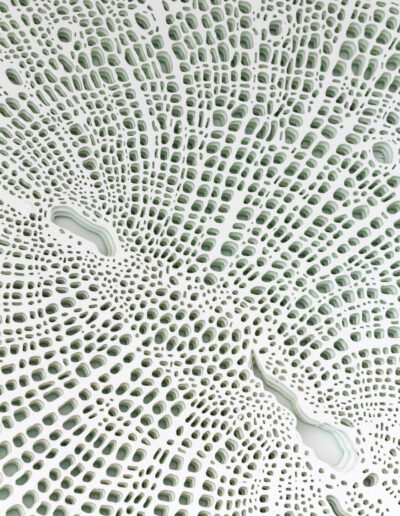 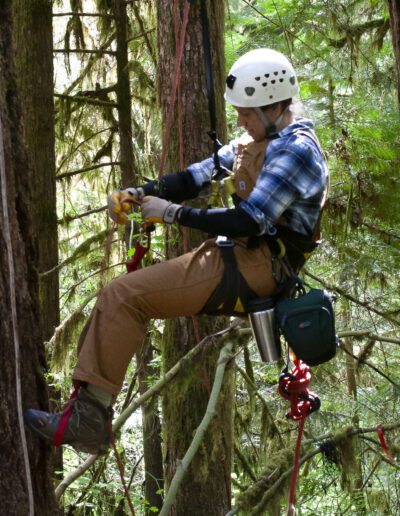 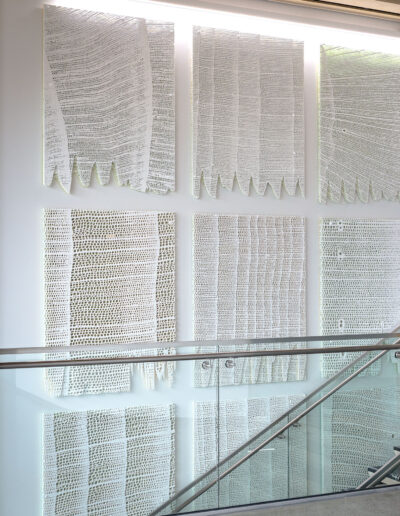 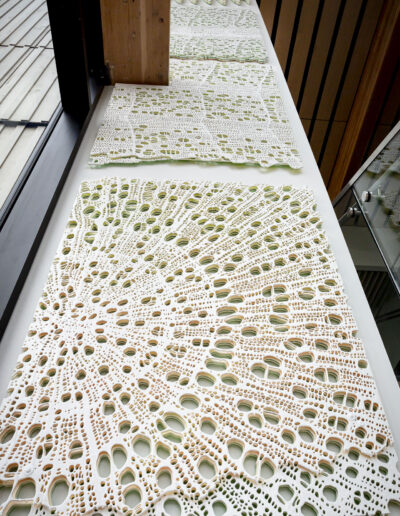 Emeritus beckons. Time and time again, I’m inexorably drawn to stand within it with my head tipped toward the sky. The sculpture creates an open invitation to participate with it and to participate in its conversation. We are fortunate to be in direct conversation with John Grade and his beautiful and subtly haunting sculpture.

Public art has an opportunity to include the specificity of place as part of the conversation when it acknowledges and responds to the site in which it’s located. Emeritus achieves this elegantly. In addition, with our artwork, John Grade and I are also addressing trees and forests that are located far away from the installation sites.

Listening to the Forest came out of my experiences with one specific old-growth Douglas-fir. It has a name: the Discovery Tree. It lives in the H.J. Andrews Experimental Forest near Blue River, in the McKenzie River watershed. The Andrews is a forest that’s managed partly by OSU and it’s studied by numerous Oregon State University scientists. Listening to the Forest speaks about that specific tree, in a specific stand, in a specific forest, and its specific forest processes, during the times I directly experienced it while I climbed the Discovery Tree. One of the interesting things to me is that when I stay grounded in the specificity of a place – in this case, it’s a tree – the artwork I make opens and embraces more than I can hold on my own. It expands and becomes relevant and understood well beyond its place of origin. Through its specificity, it can be addressing any forest.

Emeritus draws attention to the three Giant Sequoias supporting it, and to the protective space within the trees. But it’s also in concert with a drunken forest in the Arctic where it will be traveling after it leaves OSU. This sculpture also opens and expands. As it sways between trees in the Arctic it will carry threads of its relationships to these three Giant Sequoias and to our forests here.

Time and scale are underlying elements of both John Grade’s work and my own, as well as with forest science. Listening to the Forest spans time with its composition. Using data collected in the Andrews Forest, time unfolds from single days, to spans of five days, to a year, and points toward much longer temporal rhythms through its use of thousands of holes arranged in the undulating cellular patterning of the trees’ anatomy and growth rings.

The artwork also conflates scale by expanding the microscopic cellular patterning to stretch 25 feet high, connecting 2-stories of the building. Yet each of its 16 individual panels is human-scaled. They are just over 5 feet high. The microscopic and towering scales of the forest become graspable within the human capabilities of perception and embodied experience.

Forest science expands the concept of “forest” from being “a place with trees,” a simplistic and static concept, to being seen as multitudinous complex processes and cycles of creation and growth, and of degradation, decay, and destruction. Along with its trees and streams, and plants and animals, I now see a forest as a place of overlaying melodies and rhythms.

John Grade and I both respond to the active processes of “forest” and its ever-changing nature to make art that expresses some of these rhythms and melodies. Listening to the Forest uses real-time data collected by instruments placed in the Discovery Tree to inform its composition. Data unfolds visually like a musical score that echoes but never repeats itself. Emeritus includes scientific instruments in one of the trees as part of the real-time experience of the sculpture and the space and time it exists. Instruments record sounds, images, and the shrinking and swelling of the tree as the world around the sculpture directly interacts with it.

Emeritus is wondrous! It glitters, sways, and beckons you to interact with it. Standing underneath it can produce a sense of awe when you peer up through its portal that leads you into the Giant Sequoias’ branches. Soak in the beauty of the sparkling light as its thousands of little pieces sway in the breeze. Feel how the individual tree-like shapes dangling above your head transport you to the open expanse of the firmament.

I encourage you to visit Emeritus often. Just as it impacts the sequoia grove, the trees and atmosphere impact it, changing it over time. Come at different times of the day. See how the light at sunset interacts with it. Come in the dark stillness of 4 o’clock in the morning. The more often you come, the more you are opening yourself to the conversations of the sculpture and of the trees. Shift your perspective. Silence your inner dialog and listen carefully to the emerging whispers of the sculpture and trees. Open yourself to the curiosity that may arise. Follow it.

Be prepared. When you do, Emeritus will reveal its shadowy depths. That awe you felt through beauty may become tinged with distress, just as the glittering clear shapes become tinged with gray, then transition to black as they reach toward the earth where you stand. There’s an unease, a dis-ease, underlying the elegance and grace of the forms.

Defined by its thousands of sparkling pieces, the negative space within Emeritus may present you with questions: What will happen to these magnificent trees as the climate warms? In the future, will they leave only ghostly memories of their former presence here? What may change within you when you realize the significance of the sculpture’s eventual northward migration? Emeritus will sparkle majestically for a while in a forest in the Arctic that is tipping wildly in its death because of the effects of the melting permafrost.

What will your experience with Emeritus beckon you to do? How will you respond?

As science progresses, it tells us stories about what’s happening to our forests and ecosystems. But it has the habit of telling us poignant stories in a way that isn’t very evocative to most of us, especially those of us who aren’t scientists. Science has illuminated many wondrous things. It seeks concepts and complexities that deepen understanding. But science isn’t very effective at making me feel those concepts. They’re often super-scaled and, because of their scale and scope, they appear nebulous and distant… like climate change can.

The understanding I have from science is primarily intellectual. It resides predominantly in the head. Science’s abstraction and often inhuman scales, both infinitesimal and colossal, form barriers that make these urgent issues we face together, like climate change, seem removed from daily experience, even if we know intellectually that they are not.

Seemingly abstract concepts need to move down into the body and heart where they can be felt. This is one of the powers of art. Art can transform conceptual abstractions into felt experiences. Art can make seemingly ineffable concepts humanly relatable and salient. Art can create curiosity through wonder. To experience this, you need to be an active participant with the art. Don’t just look at it, engage with it. Grapple with it. Take time with it. Ask questions of it.

Art unfolds slowly. Open yourself to it. After Emeritus, seek out other forest-oriented art on this campus like Listening to the Forest. While you’re there, wander through the arboretum. Sit inside Robert Horner’s contemplative sculpture, The Perseverance of Decay. It whispers stories of the cycles of life and destruction within its subtly irregular patterns, similar to those found in the forest. Follow the path created by the Wakanim Artist Collaborative Collective’s sculpture entitled Things Remembered in the Flood. This collective comprises four carvers who are enrolled in four different tribes. Each shares the ancestral lineage of the first peoples of Oregon. Their sculpture tells the first dated story of the Mary’s River Kalapuya.

Accept our invitation to participate in this expansive conversation. Experience and feel it through the art.

How will you respond?