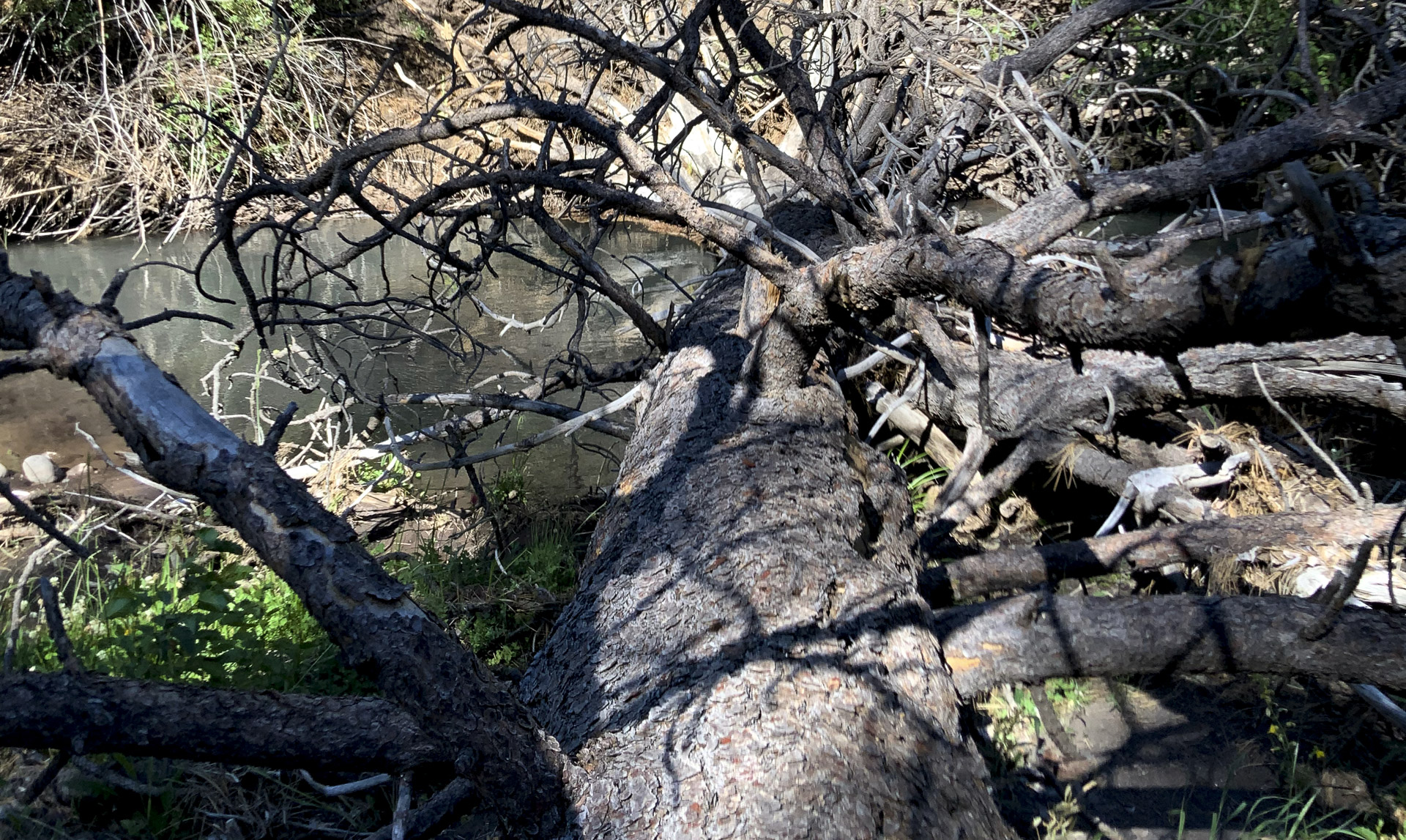 My relationship with Whychus Creek started tentatively. The milky glacial water was not inviting even though it was a hot day in July. The headwaters on Broken Top are not very far away. The water is cold.

A fallen ponderosa pine spans the width of the creek at the little beach by my studio. It still has many of its twisted branches, most of which are now stripped of bark exposing the silvery gray wood of an old snag. To avoid touching the water, I twisted my body among the branches as I balanced precariously on the main trunk to crawl to the center point of the creek with my white rock and my camera. My plan was to tie my rock to a brittle branch and drop it into the water where the current flowed under the log. 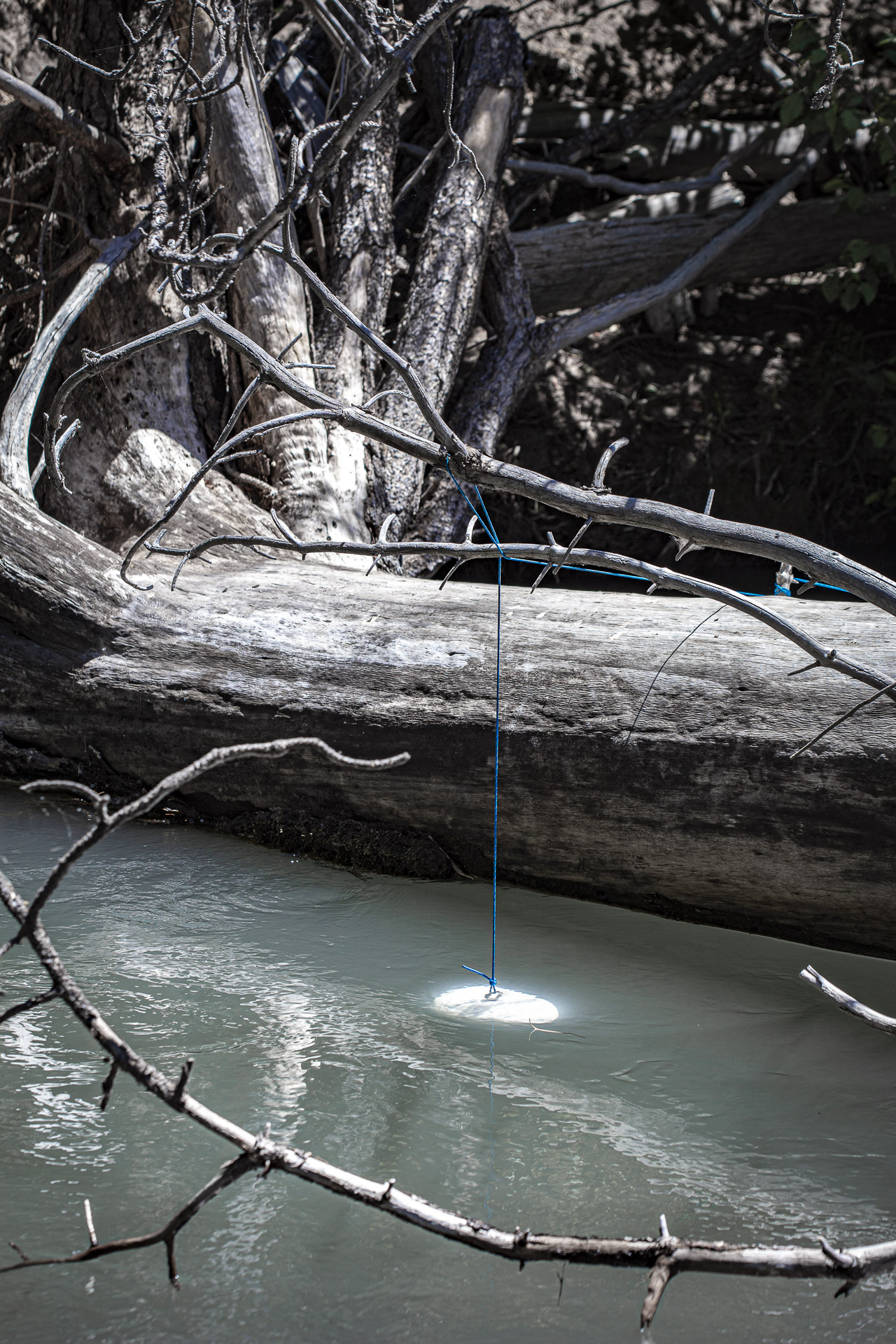 Years ago I found a rock in Lookout Creek in the Andrews Forest, painted it white, and tied a blue cord to a large eye bolt fastened to the rock through a hole drilled through it for a project named Ambient, and later for Solstices & Equinoxes. After those projects the rock started to become sort of a proxy for me. It’s a starting point. I use it as an entry point to a new place and project. It’s like coming in through a back door, or even a tunnel.

The second day I went to the creek it felt too cumbersome to crawl through and under the brittle branches of the log. I’m still perplexed at why I even crawled and twisted in the first place rather than just getting in. I felt so much resistance. I didn’t even want to touch it. I usually don’t feel this reluctant to make my acquaintance with a creek.

Perhaps there was a part of me that didn’t want to begin a new relationship with a new place.
I untied the rock from the branch and walked with it to the middle of the creek. Then I spent hours standing in the creek with the rock and my camera. I never crawled on that log again. 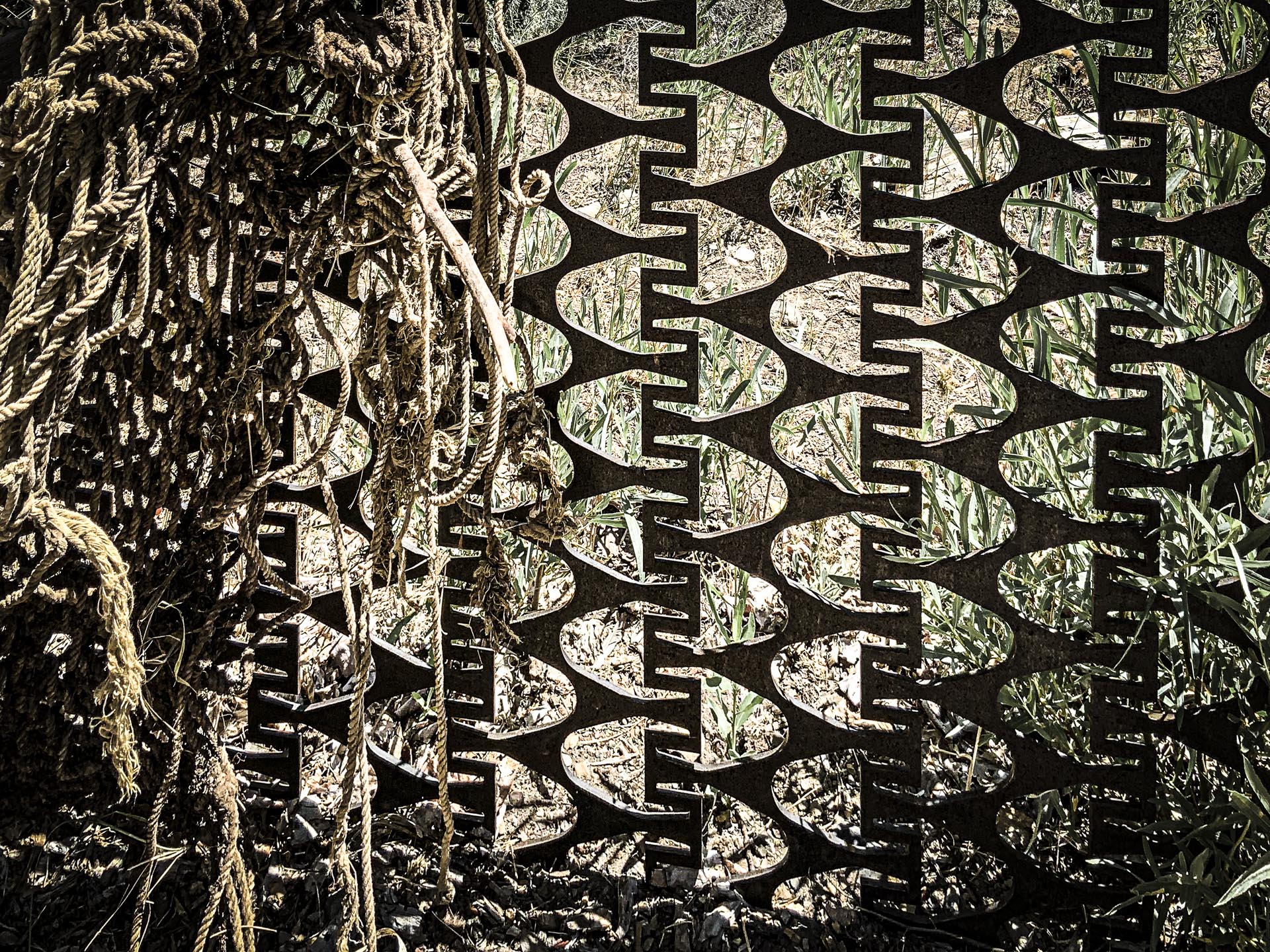 The first piece of trash I dragged out out of the creek was a large piece of corrugated plastic. I found it under a fallen alder upstream of the intake to the water pump. That morning I was walking upstream through the creek from the house to my studio with a trash bag. I hadn’t expected to find trash in the creek, but I did. In addition to the corrugated plastic, I found wrapping from glulam beams, a lighter, frazzled blue plastic ribbon, cheap sunglasses, a frisbee, and what Alex, Pine Meadow Ranch’s grants program officer, called a ‘tree condom.’

Tree condoms can become conservationists trash. Upstream there are several restoration sites, including near where the Sokol dam built by Cris’ brother Doug had been. Little trees were planted where the creek had probably been backed up by the dam. Each one of those trees was surrounded by a stretchy tree condom to keep deer from eating them while they became established. These were biodegradable, from my understanding. They are designed to install them, and then leave them alone to degrade over time. 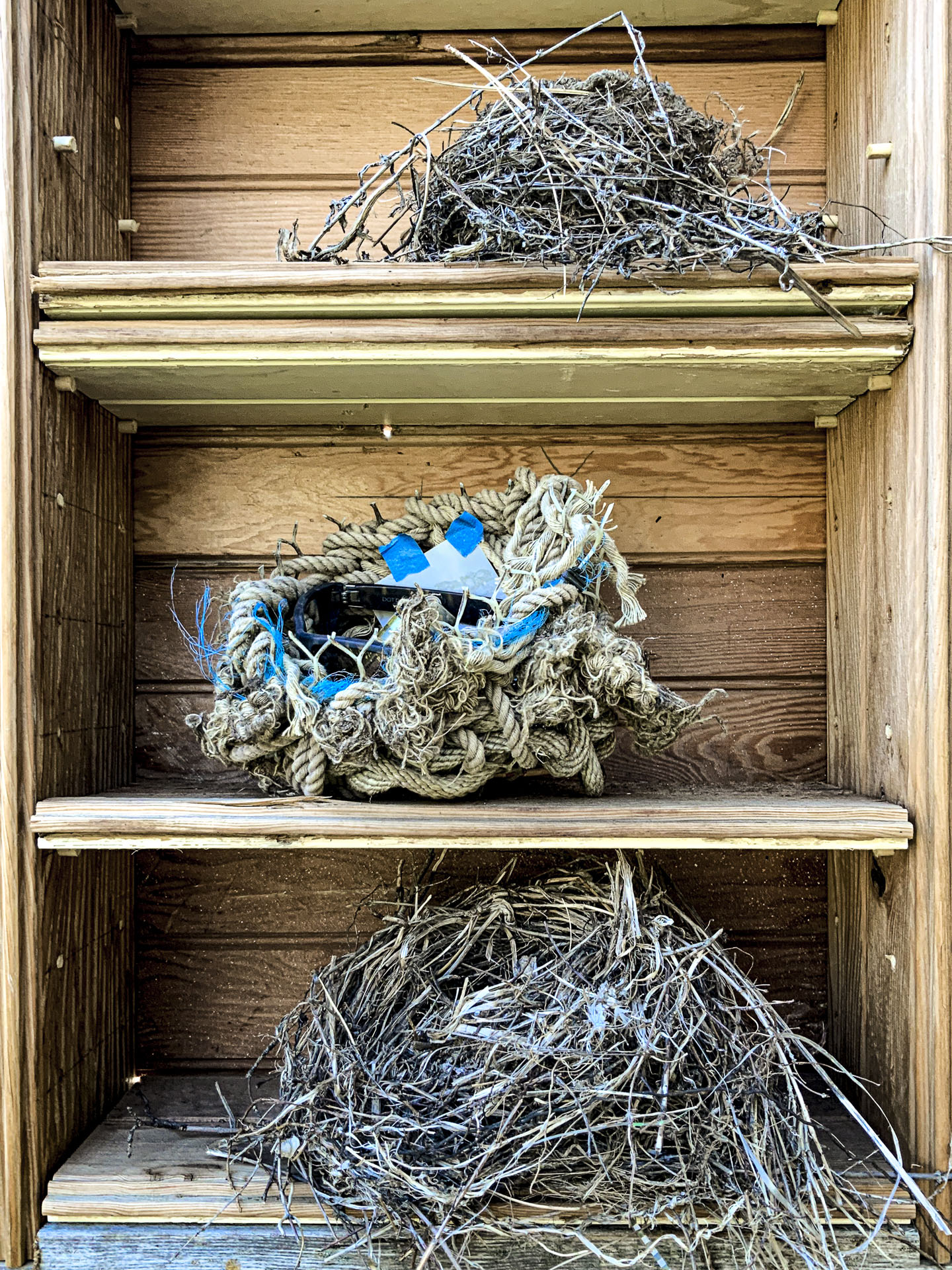 Doug had once tied a sisal hammock to alder trees at the little beach by my studio. It would have been a great place to hang out in a hammock. I didn’t see the hammock at first. It was tied only to one tree and most of it was buried under duff. The alder’s had deep grooves holding the sisal cord in place. Doug died in 2008 and the tree had grown a lot in the years since the hammock had been tied to it. The cord prevented trunk expansion, so the tree grew around it like a swollen, injured limb. I freed the tree from the hammock with my utility blade and dragged the old brittle cords up to my studio.

I hung it over the fence separating my studio from the creek. In addition to sprinklers, fences and gates are ubiquitous on the ranch. Most gates have a rusty chain to secure it closed and the gate hinges protest with high pitched squeal as they swing. Every time I opened the gate to go to the creek, I harbored a small seed of resentment. I didn’t like the barrier to the creek. But, all in all, it’s a good thing it is there, considering the cows on the ranch. The grass by my studio had a few days of constant irrigation in preparation for the cows that would eventually be roaming the area. Cows can be a destructive presence in riparian ecosystems. Not only do they pollute creeks and streams, but their hooves are contributors to rapid erosion. So squeaky gates with rusty chains it is.

One hot day in my studio I had a hard time getting to work on my drawings. I resisted it like I had resisted touching the water. I went outside onto the deck of my tent studio and sat in the rocking chair. Eventually I reached for the tree condom and cut it. I used fishing line to close one end, and then I wove pieces of the hammock into it. The blue plastic ribbon was woven in too. After two hours of cutting and weaving, I had a nest. I placed the sunglasses, the lighter, and a small failed drawing inside it. My tree condom/hammock nest now sits on a shelf with better built nests made by birds, and some loosely interpreted nests made by other artists. 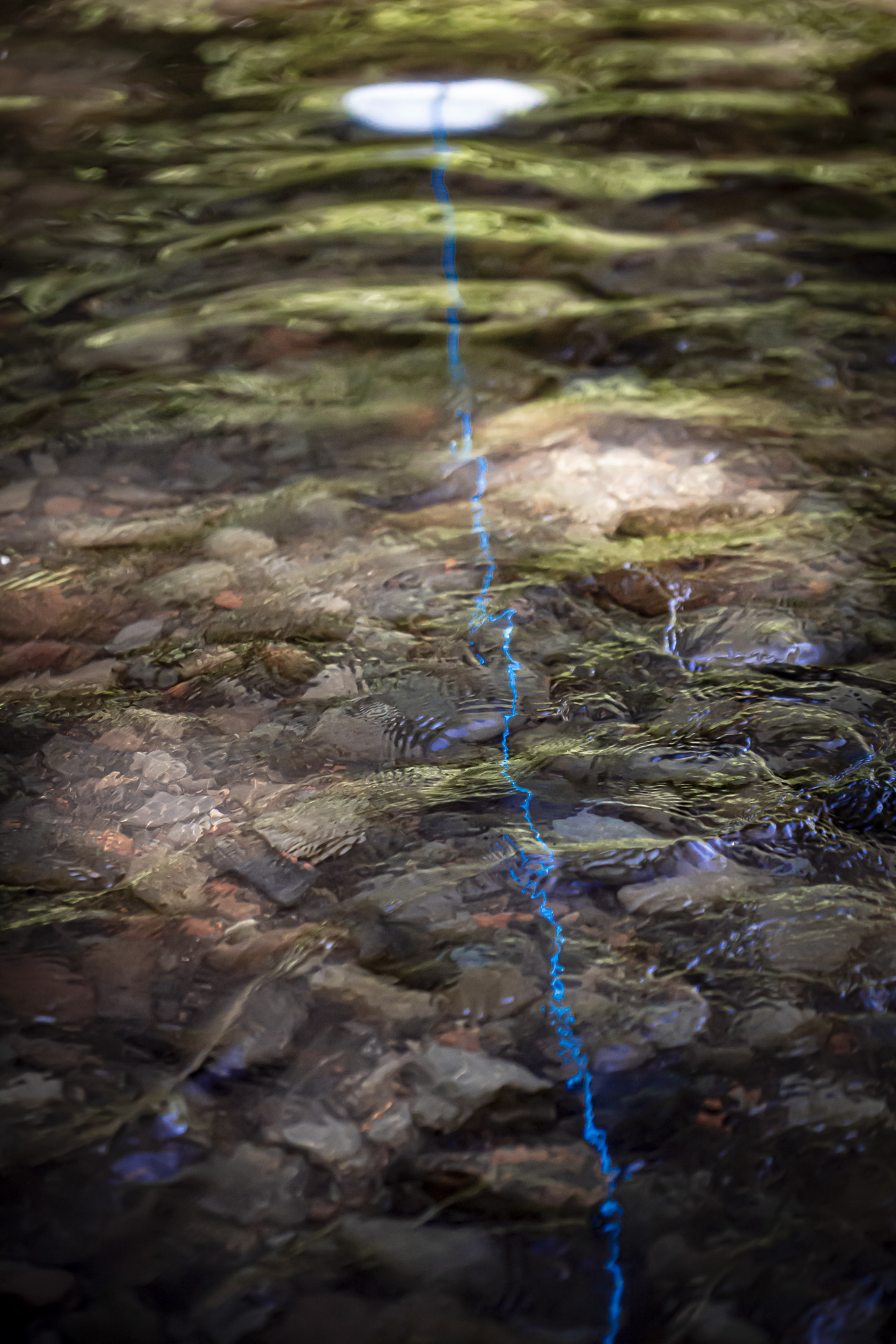 And Then I Swam, Leah Wilson

Finally I swam in the creek. It took a while to build up to swimming. The days preceding it I only dunked myself in quickly. When I swam, I let myself be carried by the current until the water became too shallow to carry me any further and I had to walk.

On day 14 at the ranch the creek became cloudy with yellow sediment. Like the first day, it wasn’t inviting to get it. I wasn’t able to see my feet in the shallow water.

The last day of my residency, still murky with silt, I found it very hard to say goodbye.