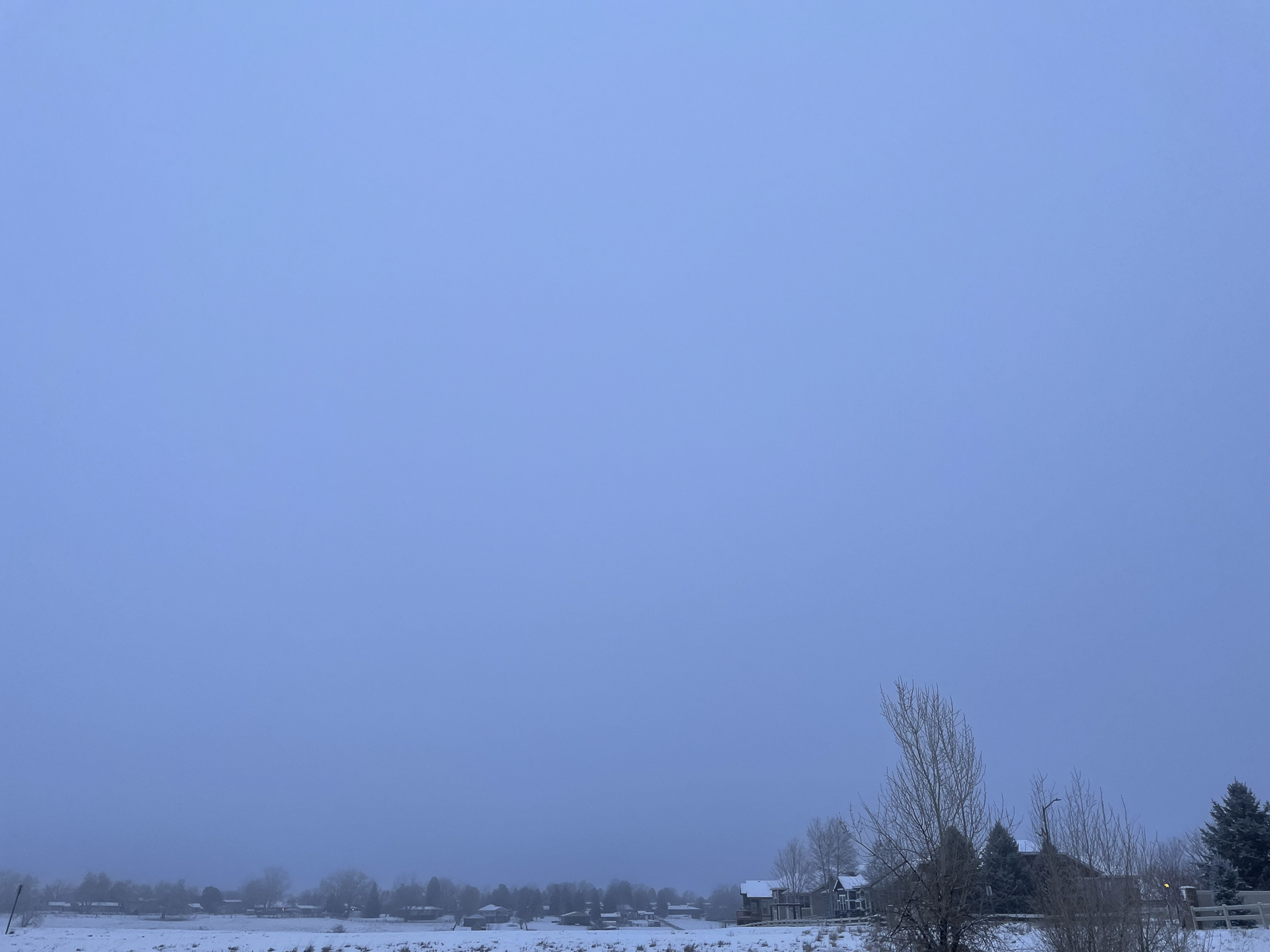 Image: January 2, 2023, 7:23 am, Loveland, Colorado.
Last night’s dusting of snow almost covered my footsteps in the snow from the storm a few days ago. I stepped across the field in the same divots my feet made the previous mornings. Earlier a rabbit followed my footprints, its tracks parallel to mine. Gossamer fog obscured the housing track in the distance creating the illusion that the prairie could extend forever in the ubiquitous soft periwinkle light without any human interruption.

This wasn’t meant to be a project. It was merely something to do when the human world was so surreal. We were shut inside. We weren’t supposed to see our families and friends. The doors to our jobs were locked.

The outside world continued without interruption. The birds flocked and migrated. Trees lost their leaves in the fall and grew new ones in the spring. It rained. The sun rose every day.

It was a little thing to do, a grounding thing. I would walk outside, face east, and take a photo of the sunrise with my phone. I would witness a natural rhythm and pattern each day as the sun made its appearance, record a moment in time and place, and send it off to the digital world.

It wasn’t a project so I didn’t give it much thought or planning. I just did it.

Soon I tried to anticipate when the “peak” sunrise beauty would be and take the photo then. It became a game about predictions and judgments. It was subjective. It was impossible. And it quickly traveled far away from being a witness to becoming a critic.

This opened the opportunity to be lackadaisical about the time I go out to take a photo. One day I could be a little early, the next day a bit late. It didn’t really matter much.

At one point I started to correct the camera’s color errors using Adobe Lightroom. I held my phone’s screen in front of me against the sky and compared the color and the values on the screen to what the sky looked like. However, the sky is not a backlit screen with a limited palette of pixels. The sky also changes constantly and the sky I compared my photo to was never the same sky as the one I captured on my screen.

Because it was not a project, I was slow to correct my inconsistencies. Yet they nagged.

I am two days into the third year. I use the same app to check the time of sunrise each day. I set my alarm. I take a photo at the time my app reports. I don’t correct the colors. This year a more true pattern will emerge.

When I was looking for optimal sunrise beauty I began to create a habit of going outside at sunrise. When I was imprecise I had a routine. Now I have a procedure. It’s not complicated, it is simply consistent. The simple parameter of a system makes what I am doing slightly more objective. It gives me space to do other things, to see other things when I follow a system. It seems to be a contradiction that following a procedure can be liberating and give a sense of expansion.

If I let it, a procedure can become the foundation of a ritual. When a ritual is honored, it has the potential to open a door to the unexpected.
Sunrise is no longer a habit or a routine. This year I have designated it as a project and it is now housed along with my formal projects on my website. It is a ritual.