River Blues… and greens and yellows

Researchers have been tracking the changing colors of U.S. rivers for almost 40 years by looking at NASA and USGS satellite images. 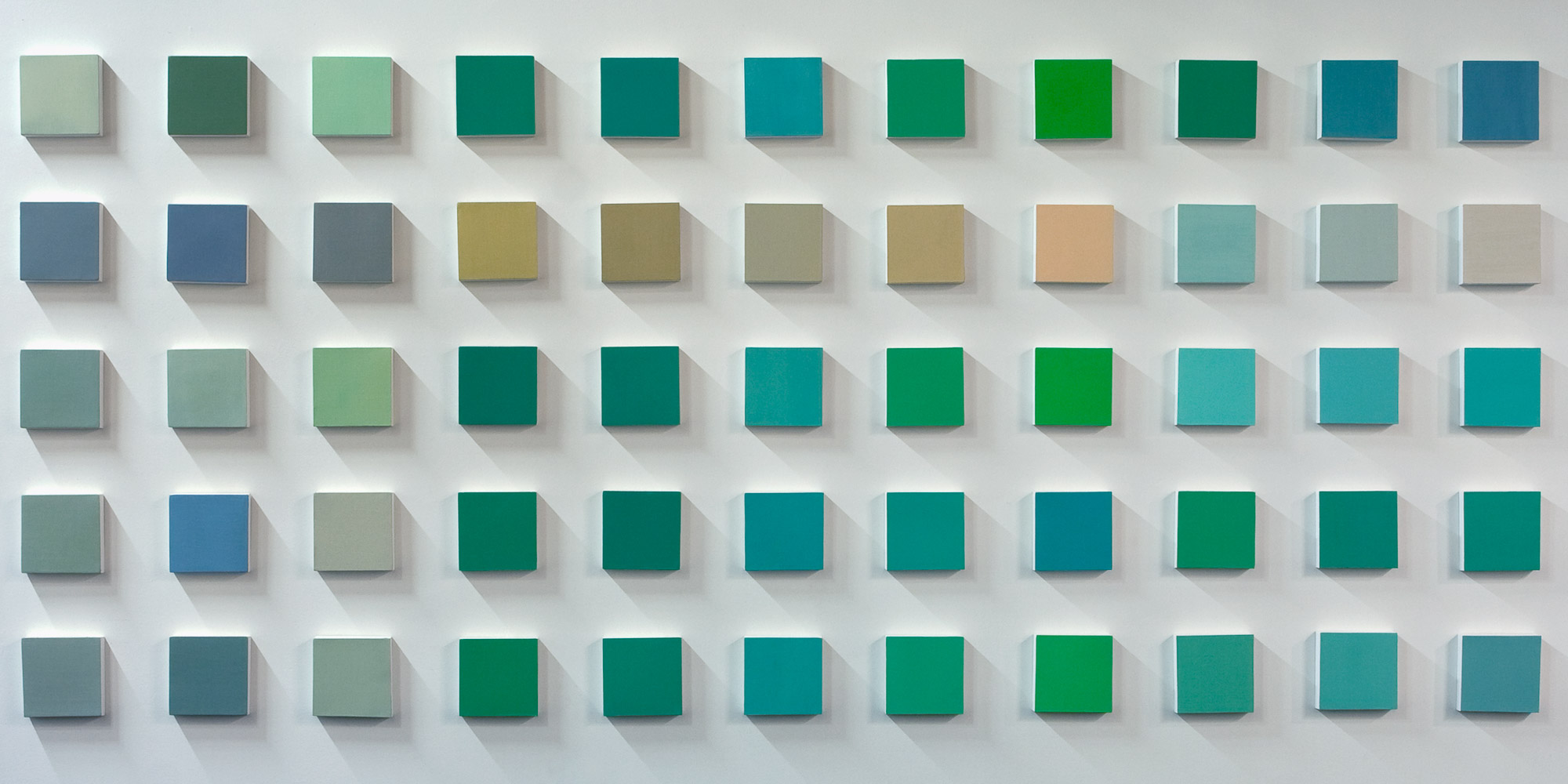 A Year of Average Colors of the South Yuba River: a mathematical determination of an aesthetic value, oil on 65 wood panels, 55 in. x 151 in., 2008, Leah Wilson

U.S. rivers have been changing color since the 1980s. The changes usually happen so slowly that it is practically imperceptible. Colors shift naturally in response to the environment. However, the faster they change, the more likely it is that is because of human caused environmental factors.

The color of rivers has fascinated me for decades. Every river has a unique color palette, and they all fluctuate with the seasons. Color is one way that I have come to know individual rivers. A river’s color is a facet of its personality. And now, through satellite images and long-term data collection, we can clearly see how the colors are drifting away from their traditional cyclical patterns. The personalities of rivers are changing. 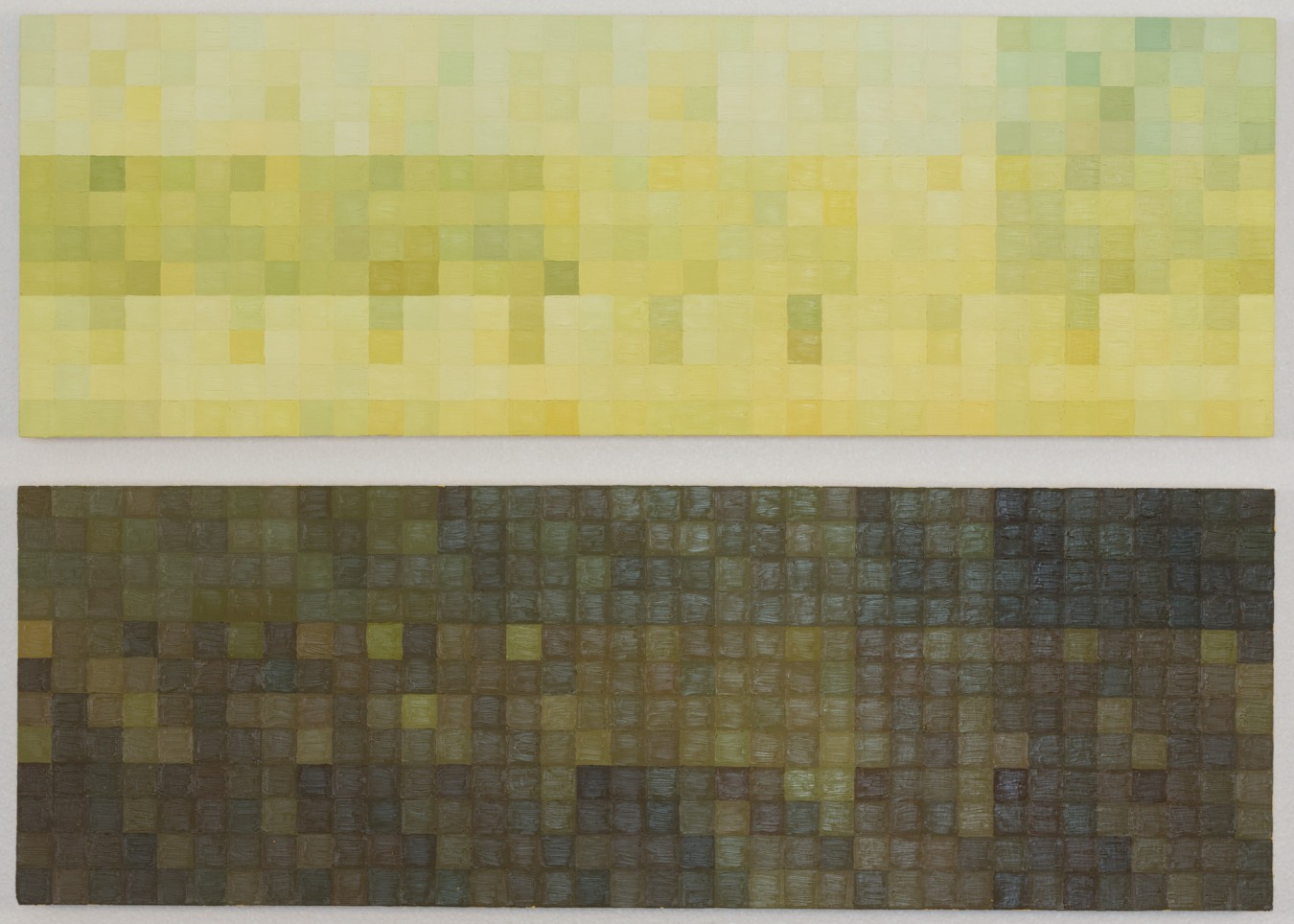 Rivers are transitioning from blue, becoming green and yellow. More than half of the rivers in the U.S. have been shifting to a yellow-dominate hue over the past three decades. The yellow shift is happening primarily in the east.

Sediment contributes to the yellowing of rivers. I noticed the effect of sediment when I was painting A Year of Average Color of the South Yuba River: a mathematical determination of an aesthetic value.

One of the locations that I observed was at the mouth of Spring Creek. The colors that I collected there were more yellow than the green-blue of the main South Yuba. This makes sense to me: Spring Creek is steep. It creates a small pool at its mouth that is often a beautiful golden color from the sediment transported from higher in the Sierra foothills.

Many years later at the HJ Andrews Forest, working on my project Ambient clearly confirmed this. The water in the cement basin near the mouth of Watershed 3 was yellow. The basin floor was thick with mucky sediment brought down by the steep creek, tinting the water yellow with tannins. 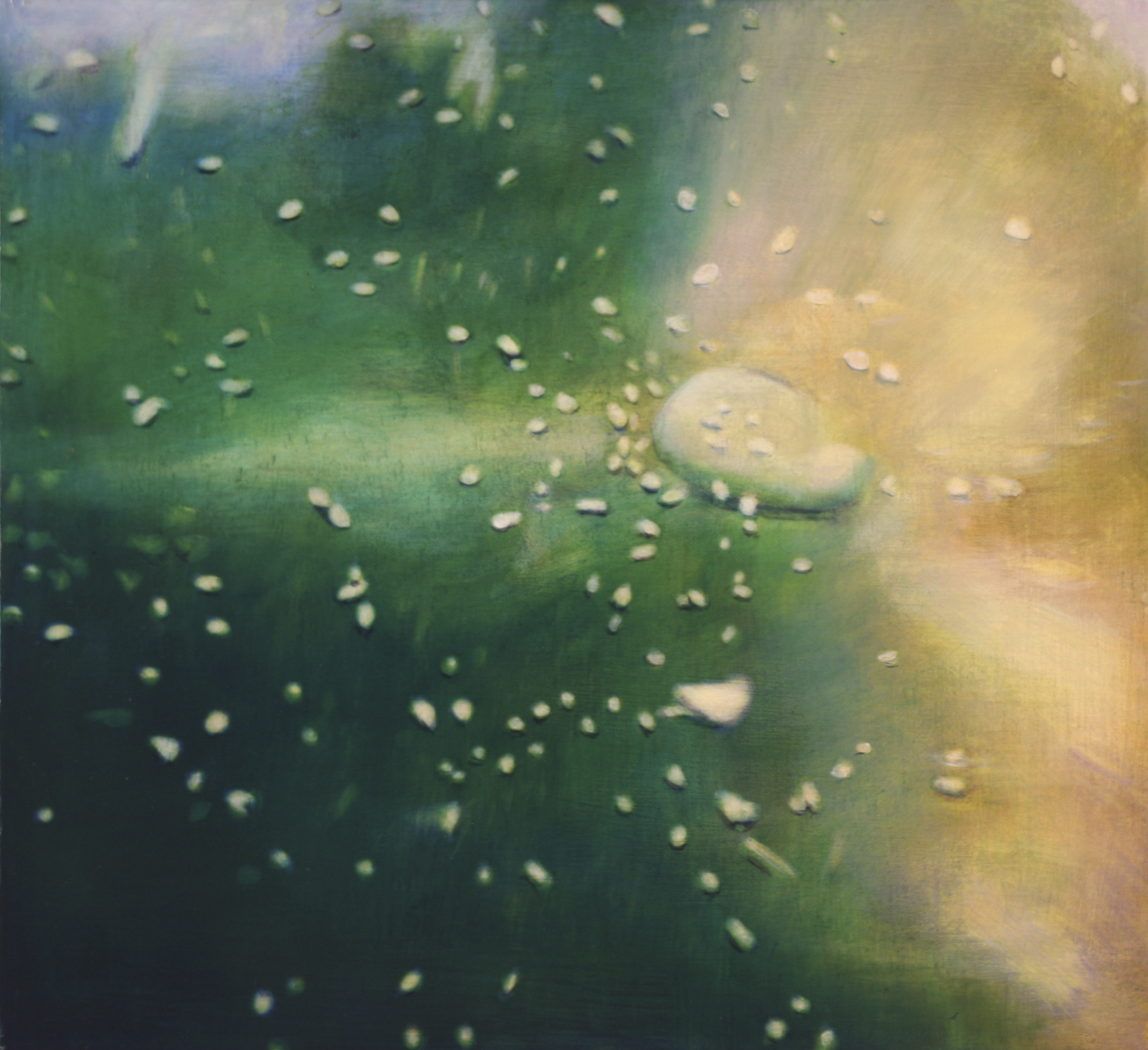 About one-third of the rivers seen with the satellite images are now green-dominant. Greening rivers are found more in the northern and western U.S. than in the east. A move toward green from blue indicates an increase of nutrients in the water, mainly fertilizers. This also makes sense to me since fertilizers makes plants grow.

I have been mesmerized by watching flecks of suspended green tumbling in deep green waters, like the South Fork of the American River in the Sierra Foothills and the thick pea green Lower Klamath River in Northern California. Brown algae coats the rocks and green flecks sparkle in sunlit dark green water. 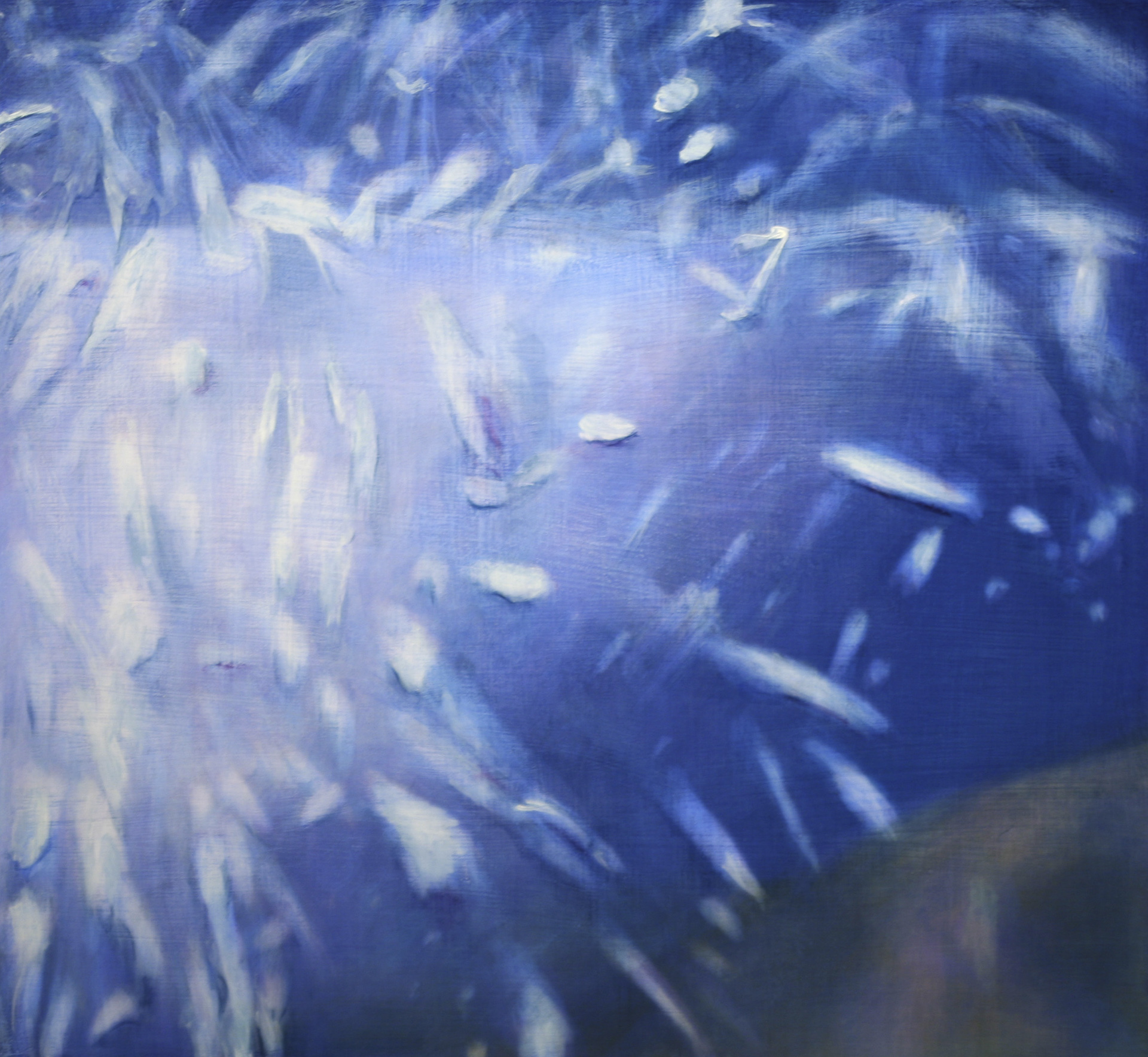 The blue of deep clean rivers is an interesting perceptual phenomenon. Water is colorless unless there is something pigmented added to it, like tannins, algae, or minerals. But we do not perceive clean deep water as a clear, colorless substance. We see blue water, and that blue is more than just the reflection of the sky, although the reflection does has something to do with the blue that we see. The blue is light. Water traps and holds onto all of the other wavelengths of light that create the rainbow of colors that our eyes can perceive. But not the blue. The short blue waves scatter and bounce back to our eyes. The deeper the water is, the more red light is absorbed by the water, and the more blue waves scatter to reach our eyes. We associate clear, clean water with the color blue because there isn’t anything else in it to reflect yellow or green back to our eyes. Blue is pristine.

The satellite images show hotspots of color change in places that are heavily influenced by human behavior such as by dams and reservoirs, agricultural areas, and areas of urban development. The rivers in these types of landscapes have been changing fast. But these are the areas that we can also instigate a return back to blue. Humans have created the catalyst for change in one direction, and humans can create the catalyst to return to blue.

This is a trend that I would like to see. Colors have a profound impact on the ways that we perceive our physical, emotional, and psychological environments. Returning rivers to blue-dominant waters may sound like a somewhat trivial aspiration, but I believe that it is a subtle goal with profound impacts for the natural ecosystems as well as the human constructed environments that we move through daily. Relatively close to where I am in Oregon, the Klamath rivers is scheduled to undergo fundamental changes over the next decade with a series of monumental dam removals. It is my hope that I will be there to witness the shift of the river from thick green to clear blue, and with the return to blue there is the hope that there will also be a return of the salmon.

Wetland hydrologist/ecologist Sarah Marshall brought this article to my attention. Sarah was the first scientist who afforded me the opportunity to witness the process of ecological field research when she invited me to follow her through the wetland prairies as she collected data. Two ecosystem color observation projects ensued: Becoming One: Finley, and Fern Ridge: One Year, Four Sites. Thank you, Sarah! 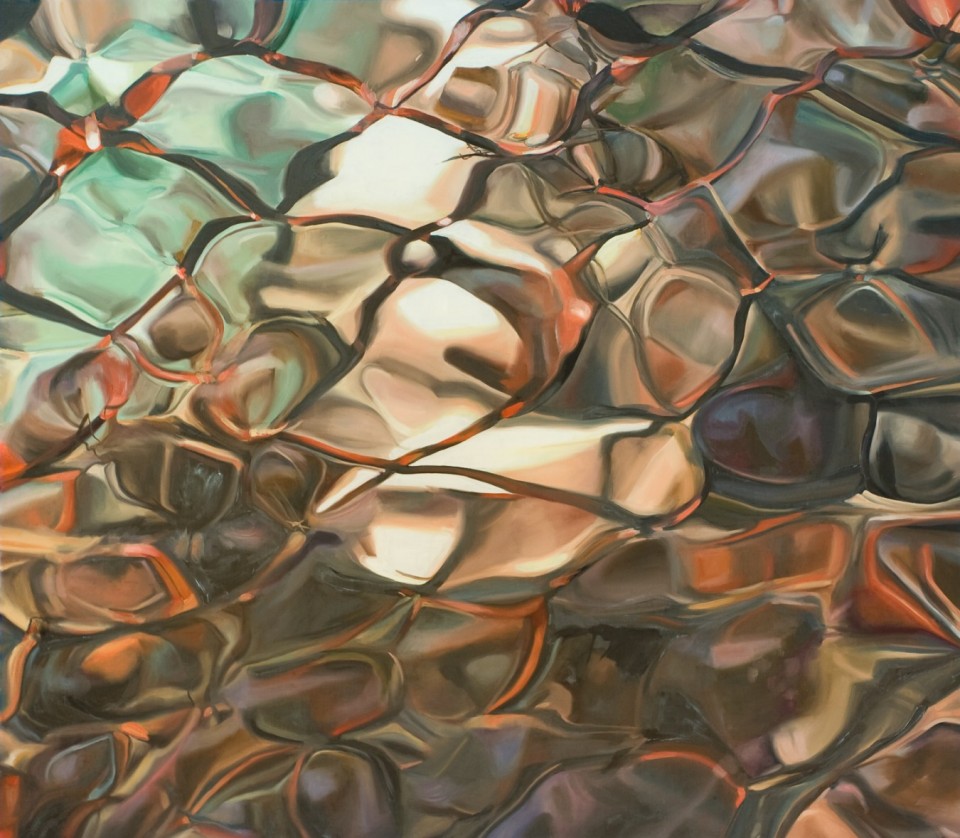